THE SKY'S THE LIMIT FOR FARNBOROUGH ACADEMY PUPILS

East Midlands Airport visits for Farnborough Academy students aim to get them excited about the world of work and fired up to study harder.

Demi-Mai Stokes has gone from being a teenager who got into a lot of trouble at school, regularly being excluded, put on detention and not interested in her schoolwork, to being a model pupil.

And it’s all thanks to a two year-long employability project launched by her school, The Farnborough Academy, in partnership with East Midlands Airport,

On Tuesday 13th February,14-year-old Demi and a group of fellow Year 10 students were given a rare opportunity to tour the airfield, including a minibus drive down the runway and the chance to get hands on at the airport’s fire station. 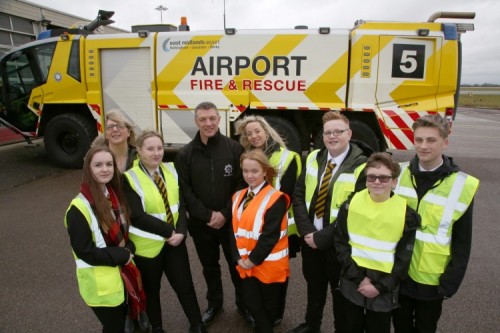 It was the fifth of six visits the students are making to the airport over the course of this academic year, aimed at getting them excited about the world of work and fired up to study harder.

During the visits, they’ve been given a unique look behind the scenes at the airport, witnessing different sides of the business and learning about the jobs they could aspire to. They’ve been into the air control tower and quizzed air traffic controllers, done a retail challenge where they had to make business cases to the airport’s managers for new business ideas which could be launched in the terminal building and will soon be creating their own challenging customer service role play scenarios.

Clare Watson, deputy head at Farnborough, said: “The project has been transformational for our pupils. We have seen the children grow in confidence before our eyes and importantly develop key employability skills such as leadership, teamwork and resilience. It’s enabled our pupils to look at the wider world of work and interact with employees from different sectors of the airport. There has been significant impact on each individual child from improving attendance, reducing negative incidents in school and raising aspirations for the future.”

At the start of their second year some of the pupils will do a full week of work experience at the airport. They will also all be given the opportunity to have a personal mentor from the airport’s senior management team, who they will meet with them at regular intervals throughout Year 11.

Demi-Mai said: “It’s given me a greater insight into how a large organisation works and I was able to link this to how a school is kind of like a business where the teachers support the pupils to be successful. I used to be easily distracted and thought I was always right but the project has helped me develop my listening skills and have more respect for other people’s opinions. It’s also helped me with my confidence and speaking to new people.”

East Midlands Airport has committed to running the scheme with future groups of students from Farnborough and the school has also secured interest from other local employers, such as Nottingham Trent University, British Gypsum, Nottingham Crowne Plaza Hotel and Land Rover, to offer pupils similar experiences within their businesses.

Ms Watson added: “The drip feed effect, where students get a whole a series of experiences over a longer period of time, is a lot more valuable than traditional work experience or an employer coming into school to do a presentation. It takes time for the pupils to really imagine themselves being in these roles.”

Colleen Hempson, Corporate Social Responsibility Manager at East Midlands Airport, is delighted with the impact of the project: “The airport is committed to raising the aspirations of local young people through work experience programmes, school visits to our on-site Education Centre as well as colleagues volunteering their time in schools supporting activities like mock interviews and careers fairs. However, this opportunity to work more intensively with a smaller group of students has been eye-opening and it’s great to see the students grow both in confidence and ability."

He explained: “This scheme was inspired by a project in Nashville USA. Companies are approached and asked to help improve a school by showing students what life is like inside their business. As a result, the students feel more confident and ambitious and study harder to realise their ambitions. In Nashville it has resulted in significantly increased achievement.

We’re excited about the difference it’s already making at Farnborough and we’d like to see it happening on a bigger scale. Nottingham schools have had a lot of bad press in recent years. Maybe when it comes to employer engagement we could lead the way?”

THE SKY'S THE LIMIT FOR FARNBOROUGH ACADEMY PUPILS