To mark the 100th anniversary of the Armistice of World War One, an image of a poppy and the words “we will remember them” are projected onto the air traffic control (ATC) tower at East Midlands Airport until Monday 12 November. 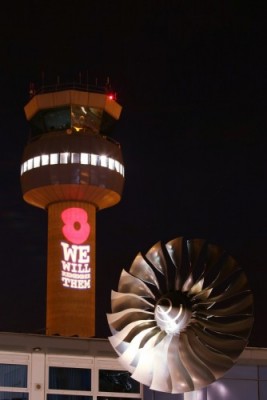 Today East Midlands Airport serves almost five million passengers a year and is the UK's most important hub for dedicated cargo aircraft handling 1000 tonnes of freight a day. But it is steeped in military history, serving both World Wars.

Aircraft have been flying to and from the site of East Midlands Airport since World War One when there was a basic field strip. The first paved runway, however, was not laid until 1942 when the RAF began rapidly expanding to combat the German threat.

During the Second World War, RAF Castle Donington served as a relief facility for the Bomber Command Operational Training Unit at Wymeswold near Loughborough. In 1943 part of the Wymeswold resident unit relocated to Castle Donington bringing with them Wellington bombers. In the period leading up to D-Day, crews from RAF Castle Donington operated special flights to drop propaganda leaflets to the patriots of occupied Europe.

With the general contraction of the armed forces that followed the end of the war, RAF Castle Donington was closed in September 1946. Following the hostilities, civil flights from the East Midlands were recommended by Derby Airways, which later became British Midland Airways, from a grass airfield at Burnaston, south-west of Derby city centre and now the site of the Toyota plant. However, this site was prone to water-logging and a commission from Nottingham and Derby was formed to identify a new airport site. Eventually, RAF Castle Donington was chosen primarily because of its proximity to the proposed M1.

The current airfield was bought for £37,500 and, following an investment of £1,375,000 and a 13 month build period, East Midlands Airport opened on 2 April 1965 by Prince Phillip when the first flight (BMA Herald G-ASKK) arrived from Glasgow.

Commenting on the air traffic control tower projection, East Midlands Airport's Managing Director, Karen Smart, said: “As a former RAF Officer myself, creating an opportunity to mark the occasion of the 100th Anniversary of the Armistice of World War One is important to me personally. This airport has its roots in military aviation and, as the site of a World War One airfield, it is fitting that we use the ATC tower, which is a regional landmark, to remember those who sacrificed their lives during conflict.”

The projection has been made possible thanks to Drew Baumohl, a freelance theatrical lighting designer based in Nottingham.