Aviation Minister, Robert Courts MP, described East Midlands Airport (EMA) as “a key facilitator of UK trade”, during a visit as the gateway gears-up for a record-breaking festive freight operation. 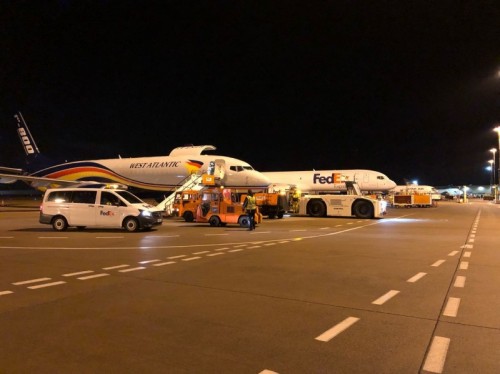 The Minister visited EMA’s cargo operation yesterday evening, one of the airport’s busiest nights of the year in the run-up to Christmas.

More than one million individual items pass through EMA each night at this time of year, ranging from household items, personal electronic devices and clothing to luxury cars, medical supplies and manufactured components.

The autumn is the airport’s ‘peak season’ for cargo when a surge in demand is driven by Black Friday and into the run-up to Christmas. However, the continued consumer preference for e-commerce, the increased cost of sea-freight and a lack of bellyhold capacity for goods on passenger planes means that East Midlands Airport’s cargo operation is in more demand than ever before.

If current trends continue, by the end of the financial year, EMA is predicting that 470,000 tonnes of goods will have been handled at EMA compared with 438,000 tonnes last year, and 370,000 a year pre-pandemic.

Businesses are increasingly reliant on the air cargo specialists based at EMA to meet the high and still growing demand for online shopping, which has been supercharged by the pandemic, as well as to support just-in-time supply chains across the UK.

Furthermore, container supply issues in Asia have made air freight more commercially attractive, especially given how much quicker goods can be moved when flown. This has proved invaluable in the response to Covid as time-critical medical supplies are speedily shipped around the world to front-line health providers.

“Over the past eighteen months, air freight has played a vital role in keeping the country’s medical and PPE supplies moving.

“Having spent time on the East Midlands Airport airfield on one of its busiest nights, it’s clear to see why the airport’s 24-hour operation is such a key facilitator of UK trade. The importance of this regional airport is also hugely beneficial in terms of local economic growth and job creation.”

Clare James, East Midlands Airport’s Managing Director, says: “It was a pleasure to showcase EMA to the Aviation Minister last night at a time of year when everyone on site is working flat out to facilitate the UK’s largest express air cargo operation. The last 18 months, in particular, has demonstrated just how important this airport is to keeping trade flowing in and out of the UK. At times, during the pandemic, East Midlands Airport was the tenth busiest in Europe as it remained open for business to allow the frictionless movement of goods including critical medical supplies and PPE during lockdown. EMA’s role as a global gateway for trade is central to the region’s Freeport bid, the final business case for which is submitted to Government next month.”

East Midlands-based manufacturer, SureScreen Diagnostics, exports lateral flow tests through EMA to customers as far away as Australia. Having the airport on their doorstep has proved invaluable during Covid.

David Campbell, SureScreen’s Director, said: “During the pandemic we have had to react quickly, providing testing kits to meet the needs of our customers across the world. The services provided by EMA have been critical in allowing us to support our customers with reliable supplies across 53 countries. EMA is invaluable to companies like ours across the Midlands and the wider country.”

While at the airport, the Aviation Minister also spent time with EMA-based RVL Aviation which operates specialist aircraft on behalf of the Maritime and Coastguard Agency.