TV documentary goes behind the scenes at EMA

East Midlands Airport’s cargo operation is the focus of a new TV documentary. 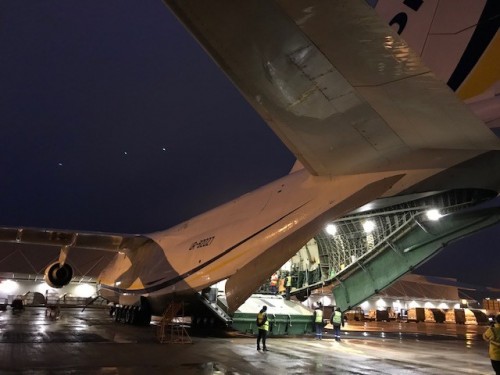 Mega Air, an eight-part series broadcast on Dave from Saturday 26 October at 2pm, follows major airlines and logistics companies as they transport products around the world.

Much of the airport footage was shot at East Midlands which is home to UK’s largest dedicated air cargo operation.

As well as filming some of the world’s biggest cargo aircraft flying in and out of EMA loaded with interesting goods, the documentary takes a look-behind-the-scenes of the operation giving viewers a glimpse of what’s involved in running an airport that is open 24 hours a day, 365 days a year.

Particularly of interest to the documentary makers were the overnight runway repair and modification works, a fire training drill, and the steps taken to control wildlife on the airfield.

The filming took place at EMA during a six-month period from October 2018 to March 2019.

Ioan Reed-Aspley, EMA’s media relations manager, said: “We’re really proud to a key focus of Mega Air. From the moment the producers first saw the cargo operation they were sold on the idea of filming at EMA. The mix of traffic coming in and out of the airport combined with the scale of the operation really appealed to them. This documentary brings to life some of the daily challenges that our dedicated team face keeping the 24-hour operation running ensuring that both people and goods can fly in and out every day of the year.”

As well as connecting 4.9m passengers a year to over 80 destinations in 20 countries, EMA is also the UK’s busiest dedicated cargo airport (dedicated cargo aircraft are those that are adapted for carrying goods and not people).

handling 365,000 tonnes of cargo a year (1000 tonnes a day). In August the airport’s cargo operation hit another key milestone with the value of goods imported and exported to non-EU countries exceeding £11bn a year.

Through EMA, and its connections to the integrator hubs in Europe and the USA, UK businesses export to countries all over the world. Latin America, Asia, North America and the Middle East are some of the biggest regions for exports

Frequent cargo flight operators who use EMA include:

TV documentary goes behind the scenes at EMA