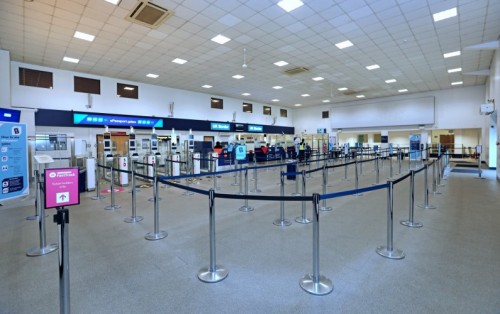 The new hall will have the capacity to house five more e-gates (automated self-service barriers operated by the UK's Border Force at immigration checkpoints in arrival halls) and will be bigger, creating a more pleasant environment for passengers waiting to have their passports checked.

Almost 5 million passengers fly to and from EMA each year whether to popular holiday resorts in Europe, for city breaks, business or winter snow-sports holidays. Two-thirds of EMA’s total passengers fly during the summer season between 1 April and 31 October. The months of July, August and September are the busiest.

Also, in preparation for the summer season, renovation of the central apron (the area on which passenger aircraft park) will take place this March. This is required to maintain the airport’s excellent performance for on-time departures for which EMA is ranked in the upper quartile of 20 benchmarked airports.

Growth of the airport’s cargo operation has been such that expansion of apron space has been brought forward five years. Widening the airport’s east apron, which is used by Fed Ex/TNT, UPS, Amazon and Royal Mail, will allow for up to four more aircraft to be parked at any one time.

Also, at the east side of the airport, the first signs of UPS’s new £114m facility are emerging. This will double the size of the UPS operation at EMA.

- a new fleet of airfield security and operational vehicles

Karen Smart, EMA’s Managing Director, says: “I’m delighted to announce plans have been submitted to improve the airport’s facilities. The demand for flights to and from the UK is forecast to grow and regional airports such as East Midlands are well-placed to absorb some of this capacity. My job is to ensure that EMA continues to prosper and remain fit for purpose for many years to come. With major infrastructure projects planned for this region such as HS2, which will provide the foundation for enhanced connectivity to and from this airport, EMA needs to be ready for increased demand. As our current cargo performance has shown, we can’t stand still, and we need to keep ahead of the game.”

EMA has made a strong start to the New Year with passenger numbers up on the same time last year, as it recorded a 1.2% increase on January 2018 with just under 216,000 passengers flying to and from the airport. Ski routes have proven especially popular this January with Chambery and Bergamo growing strongly – while sun seekers flocked to Faro in Portugal (+7.6%).

While many UK airports reported a fall in cargo volumes at the start of 2019, EMA bucked the downward trend, its throughput rising by 2.28% compared with January last year. The period from February 2018 to January 2019 recorded the highest ever tonnage (365,158) in the history of the airport on a rolling 12-month basis.