As part of the #TravelDayofAction, pictures of airport colleagues are being posted on social media every time a flight would have taken off on a typical June day pre-pandemic. A photoshoot also took place in the departures hall featuring travellers who have nowhere to go. 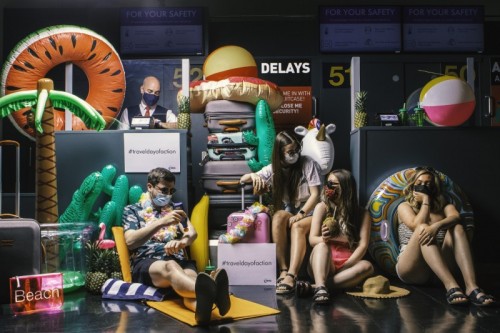 Colleagues at all three Manchester Airports Group (MAG) owned airports (Manchester, London Stansted and East Midlands), will mimic a pre-pandemic day of flying on social media, as part of a nationwide protest at the government’s handling of international travel.

Staff are posting pictures of themselves on Twitter, to mark every single flight that would have taken off on 23rd June 2019.

Other activities activity taking place at each airport include:

“Aviation has been the sector hardest hit by the pandemic, yet it appears government does not appreciate its value to the economy or trust the system it put in place to enable international travel to resume.

“Despite holding back the recovery of an industry that supports more than 1m jobs and generates more than £2bn of value, there has been nowhere near the level of support offered to other parts of the economy.

“The whole of the travel industry recognises the need to protect public health and has supported every measure government has required in response to Covid-19.

“However, with so much at stake, it is simply unacceptable that government refuses to explain why it is ignoring clear evidence that travel to many popular destinations could be opened up.

“The industry has been left with no option but to challenge the legality of this lack of transparency, and to protest against the stifling of our recovery through this day of action.”

The day of action is timed to take place ahead of when the government is expected to discuss and decide on the next steps for international travel.

It comes after MAG launched a legal challenge – supported by a number of major airlines – against the government’s lack of transparency when making decisions about the countries categorised as red, amber or green in its traffic light system.