East Midlands Airport (EMA) has been shortlisted for a national transport award.

The Transport Times’ Annual Transport Awards celebrates the success of many national and local transport projects.

EMA’s shortlisting, as Airport of the Year, is in recognition of the growth of its cargo operation. The airport, which is the UK’s busiest for dedicated freight aircraft, is now handling over 1000 tonnes of cargo a day. Current figures show that over the last 12 months, the total weight of goods that passed through EMA was 363,228 tonnes, which is the equivalent of about 90,000 elephants. This is a far cry from 1965, the year of its opening, when the airport handled 358 tonnes of cargo. 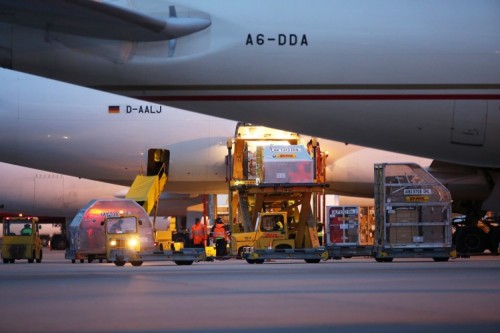 Today, EMA is second only to Heathrow in terms of the total volume of cargo handled at a UK airport. Key to this growth is the airport’s location at the heart of the country. With 90 per cent of England and Wales within a four-hour truck drive of the airport, it is the ideal home for logistics companies. DHL, UPS, Royal Mail and FedEx/TNT all have bases there and are proactively investing in the airport. Last year DHL completed a £90m expansion, doubling the size of its facility at EMA. Work is currently well under way on UPS’ new £114m facility at the other end of the airport.

These logistics operations are served by 14 regular airlines including:

Through EMA, and its connections to the integrator hubs in Europe and the USA, UK business export to countries around the world. Latin America, Asia, North America and the Middle East are some of the biggest regions for exports. The value of goods transported to and from non-EU countries through EMA over the last 12 months equates to just under £10bn.

EMA is a ‘hub’ airport for cargo, and works much in the same way as Heathrow does for passengers. Goods enter and leave the UK through EMA. Some of these are transported to their final destination by road, while others will be taken to another airport and loaded onto passenger aircraft in the ‘belly-hold’ for onward overseas transportation. The percentage of goods that are imported and exported through EMA are almost evenly split.

Recent growth has come from the rise of e-commerce driven by the changing nature of people’s shopping habits. The demand for same-day and next-day deliveries means that much of EMA’s operation is focused on the transportation of high-value, low weight express freight. Clothes, mobile phones, iPad, footwear, beauty products, fashion accessories, toys and video games all make their way to customers through EMA. Likewise, vital medical and pharmaceutical products come through the airport bound for local hospitals and medical research laboratories.

In contrast, the airport also handles heavier items such as aero engines and cars.

Karen Smart, EMA’s Managing Director, says: “I’m delighted that we are recognised at a national level. It is our cargo operation that elevates us to the premier league of UK and European airports. The significance of our role in helping the UK trade globally should not be underestimated. It is a key driver of regional growth too and it is the foundation upon which much of the local growth has been built. For example, it’s no coincidence that the SEGRO Logistics Park East Midlands Gateway (SLPEMG) is being constructed adjacent to the airport. When complete, this will enhance our offer by providing the UK’s only co-located rail, road and air freight hub creating thousands of jobs for local people.”

EMA is one of six airports shortlisted for the award which will be announced on 11 October. Also shortlisted are: