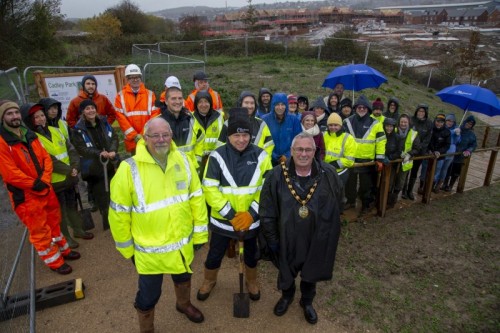 Staff from the airport were joined by colleagues from South Derbyshire District Council on Monday 21 November to plant the saplings.

The commitment is part of the Queen’s Canopy - a nationwide initiative created to mark the Platinum Jubilee. However, the programme has been extended to include the full tree planting season from October 2022 until March 2023.

Cadley Park, which is part of the National Forest, is a former colliery site which is being transformed by South Derbyshire District Council. The new 21-acre urban park next to the new Avant Homes housing site will be an area where people can discover nature and will include wildflower meadows, a network of footpaths and cycle tracks.

The tree saplings have been purchased by the airport as part of its investment in the local community. This includes a dedicated Community Fund that provides financial support to groups and projects in areas surrounding the airport. To date it has awarded over £1.3m to more than 1,500 community groups, schools and charities.

The tree planting builds on the airport’s commitment to create green spaces for the local community. Earlier this year, EMA made available £300,000 for schools to design and create eco-gardens which will create a lasting legacy for pupils and members of the community while increasing biodiversity.

A pot of money from the Community Fund was also ringfenced for charities and voluntary organisations to invest in low carbon technology. Beneficiaries of this new ‘Low Carbon Fund’ included Rainbows Hospice which used the money to introduce electric car charges and Treetops, which installed 42 solar panels.

Steve Griffiths, East Midlands Airport’s Managing Director, says: “We’re delighted to support South Derbyshire District Council as it transforms the former Cadley Colliery site into an urban park. By donating and planting trees, we are helping to create biodiversity rich green space which is important for wildlife, the climate and people’s wellbeing. I look forward to seeing the park flourish as the trees grow and increasing numbers of people are attracted to it.”