Ceramic tiles designed by students from Aspire in Nottingham (part of the Archway Learning Trust) have been displayed along East Midlands Airport’s West Pier. 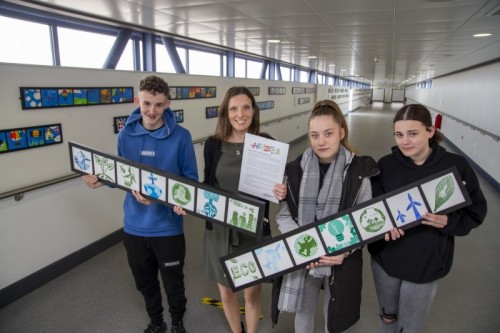 The artwork was inspired by the students’ visit to the airport in January when they learned more about how aviation is embracing environmental sustainability and, in particular, initiatives currently in place  at EMA . These include a passenger carbon offsetting scheme, a move towards the use of sustainable fuels and a competition announced last year to encourage airlines to operate ‘zero emissions’ flights.

The students were invited back to the airport on World Earth Day (22 April) to see the artwork which is on display as part of the ‘Art on The Pier’ project, along the corridor leading to the departure gates in the airport’s West Pier.

As part of the creative process, the students, supported by art teacher, Laura Austin, examined images of the airport and experimented with the colours of blue and green, which are associated with images of Earth from space, and shading to create detail and depth, giving a sense of tranquillity and the natural world.

Jo Wood, EMA’s education coordinator, says: “It was a real pleasure to introduce the students to the airport and to receive their creative response to what they learned from the visit. We’re very proud of the artwork in our terminal which brightens it up and gives passengers something interesting to look at as they walk by on their way to catching a flight.”