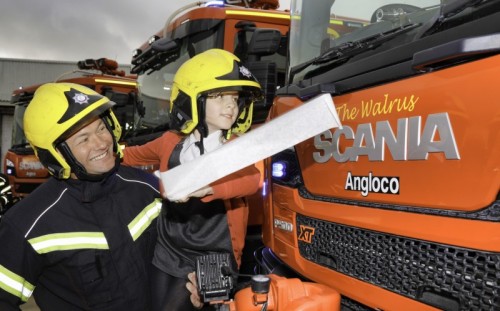 The competition was launched to mark the arrival of four new Scania airport firefighting and rescue vehicles which replaced the old fleet before the costs of maintenance became unaffordable.

Over 100 entries were received with suggestions ranging from names inspired by the operational functions of a fire engine to characters from popular children’s TV programmes and books.

After much deliberation, each on-duty fire team (called a Watch) voted for their favourites. The names chosen are:

Each fire engine now proudly displays its name on the front of the cab.

Clare James, East Midlands Airport’s Managing Director, said: “I’d like to thank everyone who took the time to enter the competition. We received so many fun and creative suggestions from people all over the country. Airports and their operations are fascinating especially to young children as the mix of planes and other operational vehicles really captures their imagination. I found it personally very moving that the competition also presented an opportunity for the memories of loved ones to be honoured, which is very much in keeping with the close-knit team at EMA that I’m proud to be a part of.”