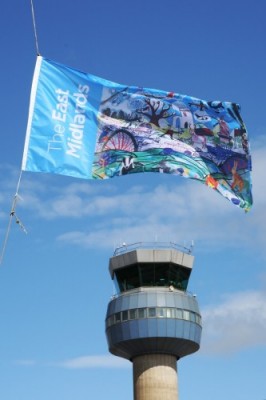 Launched by East Midlands Airport in May, the competition to design a new flag for the region attracted over 50 entries from schools across the East Midlands. A shortlist of five were put to a public vote on social media and Whitemoor Academy’s received the most support.

The competition was a fun and thought-provoking way to encourage school pupils to think about what gives this region its identity; it’s famous landmarks, people and heritage, for example. It was an opportunity to also help bust some myths and provide clarity around issues such as the region’s exact geography.

Whitemoor’s flag is an amalgamation of art drawn by its Year 4 children. The ‘tapestry of ideas’ reflects many local landmarks such as the cable cars at the Heights of Abraham, Chesterfield’s twisted spire, the Boston Stump, the Major Oak, Nottingham’s Market Square, the National Space Centre, the Peak District and Leicester’s Space Centre. These are combined with references to the region’s mining and industrial heritage.

Chris Hayton, East Midlands Airport’s Head of Corporate Affairs, says, “We were staggered by the sheer creativity of so many schools. It was incredibly hard to narrow it down to a shortlist of five. Hopefully people will look at the flag and recognise something that is familiar to them about the region. What this task proved is that there isn’t a simple way to summarise the East Midlands. What it does demonstrate, however, is that the region is great place in which to live and work. While there could only be one winner, all flag design entries submitted will be displayed in the terminal at the airport over the coming months as a celebration of everything that is unique and special about the East Midlands.”

The judging panel included professional designer and branding expert, Ian Morris from Three Rooms creative agency. He said: “It was amazing to see such talent being shown by so many aspiring designers across the Midlands region. The range of designs submitted were so varied and inspiring. It was hard judging them and so many could have easily been chosen. While not a conventional style flag, I really like the winner as it shows the diversity of the region. A lovely piece of design work which has a lot of thought.”

Nicola Mills, who teaches art at Whitemoor Academy, says: “We were delighted to be involved in such a fantastic competition, which celebrated the richness of the East Midlands through the medium of visual art. The Year 4 children at Whitemoor worked extremely hard on their entry - exploring many of the regions landmarks, as well as its wildlife and heritage. They used various sources - the internet, books and photographs to build up an idea of what makes the East Midlands so special. Exploring a range of media and artistic techniques, each child responded by creating a unique picture of an assortment of familiar places that can’t fail to make you smile. What a fantastic place the East Midlands is!”

The winning flag will be officially unveiled at a flag raising event on Thursday 11 July at 10:30am. It will be attended by pupils from the school and some of the airport’s management team.

The flag will fly from a flagpole outside the main entrance of the airport which will be seen by thousands of passengers arriving and departing from EMA this summer.