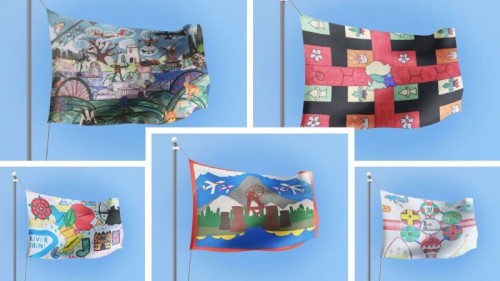 In May, the airport launched a competition for schools to design a flag for the East Midlands. The airport received over 50 designs from infant, primary and secondary schools. The schools whose designs made the shortlist are:

Now the airport has shortlisted five designs which will go to a public vote this week. Those shortlisted will be displayed on social media and anyone can vote for their favourite.

The closing date for voting is Sunday 30 June. The winning design will be announced during the week of the 1 July and the new flag will be unveiled in the week of 8 July.

Chris Hayton, East Midlands Airport’s Head of Corporate Affairs, said: “Congratulations to the schools who made the shortlist. We were delighted with the response we’ve had. Shortlisting five designs was very tricky because the effort and creativity that has clearly gone into these was extraordinary. Capturing everything about the East Midlands in one single design is not as easy task. But so many of the schools who submitted designs rose to the challenge.”

The competition was open to all schools in the region. The brief was to design a flag which represented the entire region. The winning design will be flown on a flagpole outside the main entrance to the airport.