A holiday maker who suffered a cardiac arrest at East Midlands Airport is reunited with the team of heroes who saved his life.

Alex Booth, Airside Security Team Leader and Duty First Aider was one of the first people on scene when passenger Francis Dempsey, 81 from Derby, went into cardiac arrest at East Midlands Airport, earlier this summer.

Francis, who was jetting off to Ireland with his family to attend his nephew’s wedding, was sitting with his wife in the departure lounge when it happened.

Alex immediately assessed the situation and started CPR. The airport's defibrillator was used by airport staff to shock Francis’ heart.

A 999 call was made to East Midlands Ambulance Service’s (EMAS) control room. Paramedic, Graham Ballard, was first on scene followed by Dr Matt Woods, from the East Midlands Intermediate Care Scheme, and the ambulance crew, Malcolm Storey and John Filby. 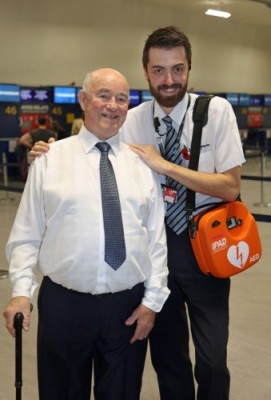 Francis' son, Gary, who witnessed everything, said: “It was incredibly humbling to see everyone trying to help my father. I just want to say thank you to all the staff at the airport and the emergency services. My father would not be here today without all of their assistance. Thank you.”

Alex Booth said: "It’s great to hear that Mr Dempsey had made a good recovery after collapsing at the airport. As one of the airport’s first aid responders, we are trained to deal with and control situations where vital first aid such as CPR is required. It was a great feeling knowing that the training I had received helped keep him alive until the Paramedics could take over. The recent work of upgrading medical equipment was also vital in the success story of that morning. I must also take the opportunity to thank colleagues in other departments who rushed to assist. It was truly a team effort."

Statistics show that when a person goes into cardiac arrest, if a defibrillator is used and effective CPR is performed within 3-5 minutes of cardiac arrest, survival chances increase from 6% to 74%.

On Friday 27 October, Francis Dempsey and his family were reunited with those who assisted him at the airport.