As dedicated cargo operations at MAG airports experience significant growth during lockdown, MAG Group Head of Cargo, Stephen Harvey, explores what’s behind this rise and what the future may bring.Following lockdown back in March, air cargo has undergone something of a quiet revolution, and one which could change the shape of the sector forever. 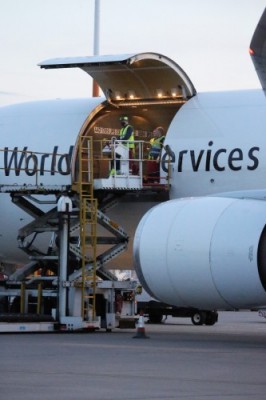 The challenges facing UK aviation are serious and well documented. Passenger numbers are in freefall and the industry continues to press hard for changes to the government’s handling of this crisis to protect jobs and support economic recovery.

However, behind the quiet terminals, ever-changing lists of ‘safe’ countries and self-isolation, lies an emerging story of aviation growth which, in part, is a beneficiary of reduced passenger traffic combined with changes to consumer habits.

Civilian passenger aircraft carry not only people and their luggage, but packages and parcels too. When they’re not flying much, the goods they should have carried need to be flown by other means. This has resulted in increased demand for dedicated air cargo specialists to transport goods to customers around the world.

MAG’s East Midlands and London Stansted airports are home to the UK’s two largest dedicated air cargo operations. Between them, they handle over 600,000 tonnes of goods each year which are flown to and from Europe, North America, Latin America, Asia, and the Middle East. The volume of goods they are handling, and have been doing so all summer, is more akin to what we would expect to see in the autumn and winter in the run-up to Christmas. In July, the volume of goods handled at EMA was up 26% on the same month last year, while London Stansted saw a 40% rise.

Both airports have seen an increase in the number of cargo flights to North America due to passenger air traffic between the US and UK dropping by 80% on this time last year. Therefore, cargo airlines have been stepping in to fill the gap. At East Midlands, DHL have launched new routes to Los Angeles, Miami, Chicago and JFK while, at London Stansted, FedEx have added three additional weekly rotations to the US.

Furthermore, during the pandemic, increasing numbers of people have turned to popular e-commerce platforms for all shopping. While online commerce was already on the rise, Covid has nudged more people into internet shopping, many of whom are now buying a wider range of goods online including everything from phones, tablets, clothes and books to white goods. Earlier in the year, when lockdown was in its infancy, internet sales rocketed from 19% in February to 33% in April.

Such is the demand for next-day-deliveries, people are also prepared to pay more to receive their purchases quicker. Therefore, the demand for express freight services has never been so great. This is another major factor in why the likes of DHL, UPS and FedEx, who have global operations at MAG airports, say they are operating at peak season levels.

This is not just a rare good news story for aviation during what is arguably the biggest crisis the sector has faced, but there are positives for the economy too. Logistics is one of the few sectors that continues to employ more people and create new jobs. The evidence is there for all to see around East Midlands Airport, for example, with the neighbouring East Midlands Gateway a good example of growth which complements the airport’s own cargo operation. This is primarily due to EMA’s ‘hub’ status as a cargo airport where not all goods that come into EMA are for the UK. Some will be offloaded onto different aircraft, while others will be collected by lorry which are driven to end users or even other airports where they are loaded onto long haul passenger flights.

Airports are engines of growth in their own right and thousands of jobs depend on them. While the current climate has created the ideal conditions for dedicated air cargo operators to grow, our airports need both passengers and parcels to be successful businesses in the long term. The demand we have seen for dedicated air cargo at MAG demonstrates how critical the UK’s airports are to the future success of our trading capability.

Strong trading links and the ability to move people and goods quickly across the world have been at the heart of the UK’s success for centuries. This is more important than ever as we prepare for life outside the EU, which is why leaders across our industry have called repeatedly on the government to give aviation the support it needs if the UK is going to avoid being at the back of the queue as the world economy gets to its feet. Therefore, the government needs to reconsider its response to the current crisis and give aviation the support it needs for the UK to bounce back quickly from the current economic slump.