EMA is only UK airport to make cargo award shortlisting

East Midlands Airport’s importance as a global cargo hub has had industry recognition thanks to its shortlisting for an international award alongside some of the largest cargo airports in the world. 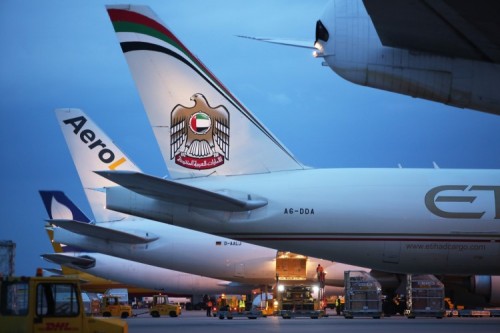 East Midlands Airport (EMA) has the UK’s largest dedicated cargo aircraft operation – planes which carry just freight and no passengers. Handling 365,000 tonnes of goods a year (1000 tonnes each day), EMA is second only to London Heathrow for the total volume of cargo handled at a UK airport.

Through EMA, and its connections to air cargo hubs in Europe and the USA, UK businesses export to countries all over the world. Latin America, Asia, North America and the Middle East are some of the biggest regions for exports. £10bn worth of goods are imported and exported to and from non-EU countries through EMA each year.

At its busiest, over 1 million individual parcels are handled at EMA each night including goods such as:

Air Cargo News’ shortlisting recognises the investments made at airports to improve cargo infrastructure and cater for the needs of airline customers. DHL has recently doubled the size of its logistics facility at EMA while work is currently underway on a new £114m UPS facility at the airport.

Growth of EMA’s cargo operation has been such that expansion of apron space has been brought forward five years. Work is soon to start on widening the airport’s east apron, which is used by Fed Ex/TNT, UPS, Amazon and Royal Mail. This will allow more aircraft to be parked at any one time.

EMA is a magnet for new complementary developments which are springing up in the local area. Most notable is the East Midlands Gateway strategic rail freight interchange just to the north of the airfield.

The 700-acre development has planning consent for up to 6,000,000 sq ft of logistics accommodation. It incorporates a 50-acre strategic rail freight interchange which includes a rail freight terminal capable of handling up to sixteen 775m freight trains per day, container storage and HGV parking. This site was purposely chosen for its proximity to the airport.

While many UK airports reported a fall in cargo volumes at the start of 2019, EMA bucked the downward trend, its throughput rising by 2.28% compared with January last year. The period from February 2018 to January 2019 recorded the highest ever tonnage in the history of the airport on a rolling 12-month basis. Driving the growth of cargo activity is an increased demand for next-day deliveries and the changing nature of consumer behaviour. More people than ever are shopping online and many of the goods ordered from overseas stockists will be flown into the UK through EMA.

Karen Smart, East Midlands Airport’s Managing Director, says: “I’m really proud that this airport's significance is recognised alongside the largest cargo hub airports in the world. This underlines why we are a nationally important piece of infrastructure. We play a key role in facilitating the UK’s ability to export and import efficiently with countries all over the world. Airports are also vitally important to the local economies and communities they serve. They are engines of growth in their own right and there is, perhaps, no better example of this than what is happening today around East Midlands Airport. We are fuelling the growth of the Midlands economy and with this comes new jobs and opportunities for people who live across the region.”

Air Cargo News winners are honoured at an awards ceremony on 26 April 2019.

EMA is only UK airport to make cargo award shortlisting