Clare James (Managing Director, East Midlands Airport) outlines her thoughts on how a Freeport would benefit the airport and wider regional economy. 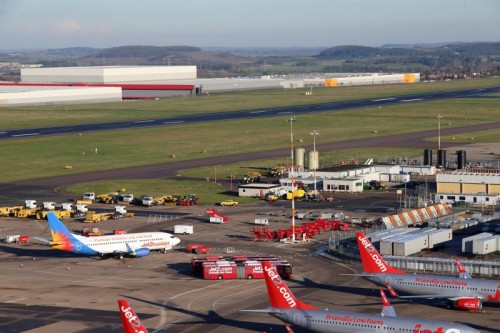 The air traffic control tower at East Midlands Airport (EMA) affords one of the best views of the region. On a clear day it is possible to see as far north as Crich, the Victoria Centre flats in Nottingham, Derby’s wind turbines, Charnwood, parts of Staffordshire and the Vale of Belvoir to the east.

Also visible to the naked eye is some of the key infrastructure around which our regional economy is built. The manufacturing powerhouse that is Rolls Royce in Derby, the tower block at Loughborough University which reminds us of the research expertise we have on our doorstep and, a bit closer, the iconic cooling towers of the Ratcliffe-on-Soar Power Station – a site which is ripe for redevelopment.

It’s only when you’re in the tower that you realise how well served the region is by the major road network as vehicles can been for miles trundling along the A50, M1, M42 and A453. It’s this connectivity that provides the critical foundation for another of this region’s biggest employers – the logistics sector.

This is where we fit in. The airport is one of the UK’s most import gateways for goods. It’s a regional and national port of entry and exit which enables businesses to quickly get goods to customers or suppliers – whether they’re the likes of Rolls Royce moving aero engines, or small pharmaceutical businesses getting PPE equipment into hospitals.

Despite the devastating impact the pandemic has had on our passenger operation, our cargo operation has gone from strength to strength. The critical role the airport played in the rapid movement of PPE to frontline healthcare providers in the early days of the pandemic, combined with the rise in demand for dedicated air cargo flights due to a lack of bellyhold capacity on long-haul passenger routes, has meant we have broken a number of records recently. December was our heaviest ever month which saw an increase in volume of goods rise by 43% compared with December the previous year. In 2020 an additional 50,000 tonnes of goods passed through the airport, an increase of 13% from 2019. Our annual tonnage now stands at 421,000.

It’s against this backdrop that we have joined a consortium of LEPs, local authorities, universities, and other businesses, to submit a region-wide Freeport bid. If successful, it would align the region’s industrial strengths in advanced manufacturing, automotive and logistics and boost competitiveness. Along with parts of the SEGRO East Midlands Gateway site, to the north of our airfield, we form the East Midlands Airport and Gateway Industrial Cluster (EMAGIC). This is one of three key sites that have been put forward as part of the bid, the other two being Uniper's Ratcliffe-on-Soar Power Station site in Rushcliffe (Nottinghamshire) and the East Midlands Intermodal Park (EMIP) in South Derbyshire.

As the ‘port’ within the Freeport, along with our road haulage and rail operating partners, the connectivity that we offer is one of the strengths of the bid. It also points to the fact that EMA is increasingly not just an important regional asset, but is a key global gateway for the whole of the UK and it will play a significant role in the Government’s ambition for a ‘global Britain’.

Should the bid be successful (we hope to hear at the Budget on 3 March), specifically for the airport, it will help speed up our cargo strategy as we plan for a future when demand is unlikely to ebb away for the specialist services provided by the EMA-based air cargo operators. It will also help further establish and safeguard the airport and the wider region as a national hub for global trade and investment to support business growth.

The bid is already creating a buzz and I hope that we get the outcome this region deserves, as it will shine a spotlight on a part of the country which has so much to offer investors, existing businesses that want to grow, and the supply chains that are linked to them.