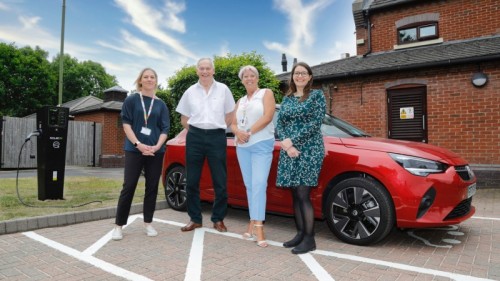 The money has been made available from EMA’s Community Fund as part of a pilot project to support community, charity and voluntary sector organisations to make the transition to more sustainable energy use. This initial round of funding was ringfence specifically for local hospices.

The project is part of the airport’s long-standing commitment to placing environmental sustainability at the forefront of its operations. Back in 2002, EMA established an industry leading Environmental Management System (EMS) and, in recognition of this, was the first UK airport to be assessed as ISO14001 compliant – an internationally recognised standard for environmental management. The airport has its own on-site wind turbines and supply agreements enabling power to be generated from renewable sources.

Furthermore, the airport’s ground operations achieved carbon neutrality in 2012. In the summer of 2020 MAG, which owns and operates EMA, became a founding member of the Government’s Jet Zero Council, with CEO, Charlie Cornish, sitting as one of only two airport representatives.

Cllr Angus Sowter, a member of EMA’s Community Fund committee, said: “When the committee considered a sustainable energy fund, there was unanimous support for offering our local hospices funding in the first instance before we opened it up to the wider community. We’re delighted that this funding is already having an impact. Not only will it help the hospices reduce their carbon footprint but, at current energy prices, it will also help keep costs down so that more money can be spent on the care they provide.”

Hannah Tee, Rainbows Trusts and Grants Fundraiser, said: “We would like to thank East Midlands Airport Community Fund for their amazing support which has enabled us to introduce electric vehicle charging points at Rainbows, which can be used by all of our families and staff. Thank you so much to everyone involved.”

A further round of funding has been made available for local community and public buildings such as schools and village halls to invest in proven technologies for ‘green energy’.  To find out more please email community@eastmidlandsairport.com

The Community Fund was established in April 2002 to support initiatives in places which are most affected by the airport’s operation. To date, over £1.3m has been awarded to more than 1,500 community groups, supporting initiatives such as equipment for sports clubs and village halls to heritage restoration projects such as church clocks.