One of the region’s most iconic and visible buildings, East Midlands Airport’s Air Traffic Control (ATC) tower, turns 20 this month. 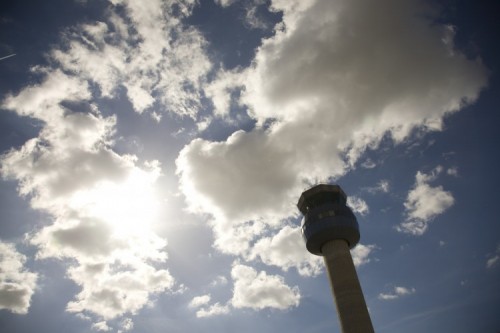 Constructed in 1999 at a cost of £3.5m it was, at the time, the third tallest ATC tower in the country after London Stansted’s and Luton airports. Today it ranks 4th tallest in the UK. EMA has control of airspace up to 10,500 feet above ground level and covering an area of 150 sq miles. On average 320 aircraft movements pass through this space each day.

As well as serving just under five million passengers a year, EMA is the UK’s premiere airport for dedicated cargo aircraft, much of which flies in and out at night due to it not having any night flying restrictions. Therefore, the air traffic services team is on duty 24 hours a day, 365 days a year. This is rotated amongst five teams (or watches) each consisting of six controllers and two assistants.

Already a very modern tower, EMA’s was one of the first to install electronic flight progress strips (many towers rely on paper copies even today). To ensure that the technology used remains ahead of the game, £130k has just been invested into upgrading its radar room. This will result in:

The 51-metre structure replaced the tower which was built at the opening of the airport in 1965. This still exists today and can be used as a back-up if needed. The taller tower was required as the airport expanded. Today, all areas of the 1050 hectare airfield can be seen from the panoramic visual control room (the glass viewing platform at the top).

The control tower is built on 12 reinforced concrete pillars and weighs 1000 tonnes. It is counter-balanced by 1000 litres of water. On very windy days it can sway slightly, and staff have reportedly experienced motion sickness working in there.

EMA’s control tower is managed by an in-house team which comprises of:

Four members of staff have, between them, 174 years of service and each has worked in EMA’s air traffic control for over 40 years. The team is currently supporting 11 trainees most of whom have joined EMA from other airports.

Commenting on the challenges of operating a tower which is in use all hours of day and night, Paul Kay, EMA’s Air Traffic Services Manager, says: “As well as having the best office view in the region, I am very privileged to run the tower at EMA. It’s not without its challenges as all of my colleagues would testify when working through the night. But we have a fantastic team here and our reputation as a great place to work is recognised nationally and evidence by the fact that a number of my colleagues have worked here for so long. During the 20 years that this tower has been in operation, the airport has grown considerably and that makes our job more exciting. I’m delighted that, on my watch, we have secured investment to upgrade the radar room to future proof it for years to come and, in the not too distant future, I will be announcing exciting plans to take roadshows into schools to inspire the next generation of air traffic controllers.”

Approximately 200 flights come in and out of EMA each day carrying both people and goods. From EMA, passengers can access over 80 destinations throughout the year while goods are flown to and from Europe, the States, the Middle East and Asia into EMA nightly.